Halina Tymusz was born in 1960 in Żary. She graduated from School of Arts in Katowice. Tymusz attended to the Academy of Fine Arts in Kraków—Department of Graphic Design in Katowice receiving the diploma in 1985 as a student of T. Grabowski and professor A. S. Kowalski. Since 1985 she’s been teaching painting and drawing in PLSP Katowice. During the years 2002—2006 she was a lecturer at Art Studio of Drawing and Painting in ASP Katowice for 1st year students. In 1986 she received the scholarship of the Ministry of Culture and Art. Main field of her creative work remains painting.

COLLECTIVE EXHIBITIONS (some of them):

Her works can be found in private collections in Poland, Germany, England, Sweden, Italy, the Netherlands, Denmark, France, Canada and USA. 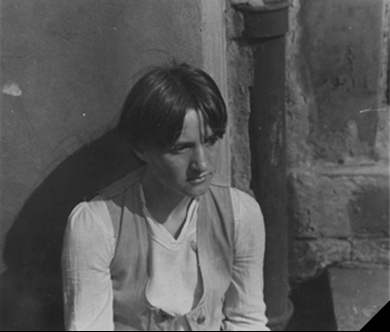 “…The girl from Halina Tymusz images sat on the simple swing. But when she started to swing, the space became obedient to her to a quite significant extent, if not completely. The little man made the space impenetrable to the time in order to stop the rhythm that is not recoverable that was made of necessity and friendship (J.R.Bogers) …the girl “annihilate” only one space for another that is a background. Yet there are signs, clues, hints in this picture suggesting that one space is immersed in another one that has the stigma of threats that are unknown to a child. Unknown means nonexistent. If so, the girl form the swing may have such a conversation, as Alice in Wonderland (L.Caroll):
— Would you tell me, please, which way I ought to go from here?
— That depends a good deal on where you want to get to — said the Cat.
— I don't much care where — said Alice.
— Then it doesn't matter which way you go — said the Cat — …So long as I get somewhere.
— Oh, you're sure to do that — said the Cat— if only you walk long enough…

S.T. Coledridage: "If a man could pass through Paradise in a dream, and have a flower presented to him as a pledge that his soul had really been there, and if he found that flower in his hand when he awake — Aye, what then?" Halina Tymusz will answer this question by painting more and more captivating differences between the spaces of reality and the realities of space...